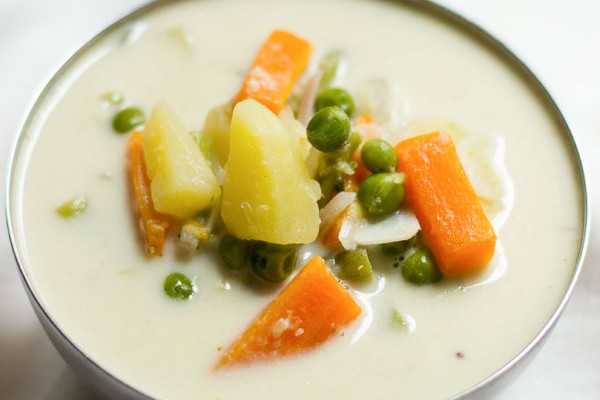 Interestingly, the gravy is also called Mappillai Sodhi for a reason. Mappillai means bridegroom. The bride's family prepares Sodhi to treat their son-in-law on his first visit to the bride's place after the wedding. The gravy also enjoys a coveted spot in many wedding and festival menus, especially in Tirunelveli's Saiva Pillaimar community. Even die-hard non-vegetarians love Sodhi for its delectable taste and flavour.

You will need the following ingredients to make Sodhi Kuzhambu:

Now, roast the split mung bean lentils until lightly browned, powder it in a mixie and keep it aside.

When the vegetables are half-cooked, add the second milk. Now grind the chilly and cumin and add to the coconut broth. Add the required amount of salt and again bring to a boil.

Then add cooked and mashed split mung bean lentils to the Kulambu. Dissolve the chickpea flour in water without lumps and add it to the stew and bring to boil. Temper the mustard seeds, lentils, curry leaves, and pour them into the stew and allow it to cook for a few minutes before turning off the heat. Your Sodhi kuzhambu is almost ready.

Finally, add the first glass of coconut milk, pour the juice of half a lemon and cover the stew for five minutes. Serve it with hot rice for lunch or idiyappam for dinner. Potato Varuval and Inji Pachadi are an excellent combination for this gravy.

How to cook the vegetables of Tirunelveli Sodhi?

Cooking vegetables for Sodhi can be done in a pan or pressure cooker. However, the latter is easy.

Is it possible to cook vegetables and dal together for sodhi kuzhambu?

Cook vegetables and dal separately so that they get cooked evenly.

Will 3 whistles be sufficient to cook dal for Tirunelveli sodhi kulambu recipe?

Soaking the dal prior to pressure cooking for 30 minutes will enhance uniform and perfect cooking. Whistles and soaking time play a significant role while cooking dal, and they must be matched accordingly.