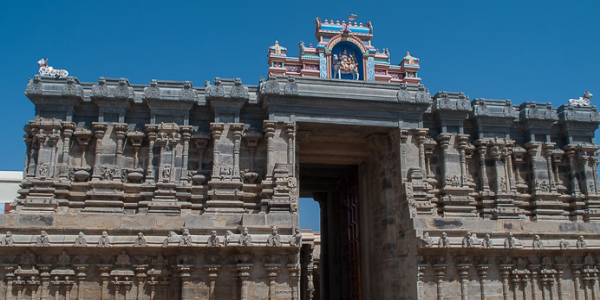 The sixth Kailasam temple at Sri Vaikundam (ஸ்ரீ வைகுண்டம்) was built by Uromasa Maharishi, the grandson of Lord Brahma and the disciple of Sage Agasthiyar. This is the Sani Sthalam (சனி ஸ்தலம்) among the Nava Kailasam temples.

According to Hindu beliefs, the period of Ashtamathil Sani (அஷ்டமத்தில் சனி) and Ezharai Naatu Sani (ஏழரை நாட்டு சனி) are times of great trials and misery. This is the reason why people get extremely scared when their zodiac signs are aligned directly under the influence of Saturn God (சனி பகவான்). He rules over a person’s life for nineteen years and determines the extent of internal peace.

It is believed that Saturn exerts his influence either as a peaceful breeze or a destructive tornado. The dominant power of Saturn can turn a person into a prosperous millionaire or a penniless pauper. To escape from the negativity of Saturn God, one should worship the Lord at this sixth Nava Kailasam temple.

Thamirabarani’s Directional Shift
Around 2000 years ago, the River Thamirabarani flowed at the north of the temple. As Sri Vaikundam suffered frequent damages due to floods, it is said that Ponnappapillai changed the course of the river to the south. Now, Thamirabarani flows to the south, turns east and then runs as the southern border of this town.

Outer Corridor
As we enter the temple through the southern entrance, we reach the Garden Corridor (நந்தவன சுற்று). This corridor is lush with Sodom shrubs (வெள்ளேருக்கு), Bael trees (மஹா வில்வம்), Viboothy Illai (விபூதி இலை) and gooseberry trees (நெல்லி மரம்) which make this place a dense grove. On entering the inner corridor, from the garden courtyard, we are greeted by the idol of Lord Vinayagar at the entrance. 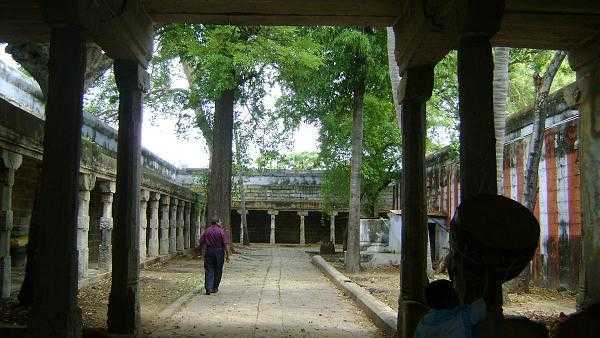 Main Deities
The Lord of this temple is Kailasanathar and has the attributes of Saturn and the Goddess is Sivagami Ammal.

Distinct Features of the Temple

Suyambu Lingam
The Kailasanathar temple at Sri Vaikundam is distinctive and the Lord’s idol here emerged on its own with no interference by human hands (சுயம்பு லிங்கம்). Among the nine temples of Kailasam, Suyambu Lingams are found only at Papanasam and Sri Vaikundam.

Demigods as Gatekeepers/Guards
Long back, a unique ritual had been practised here. Two demigods Agni Puthirar and Veera Puthirar served as the guards for this temple. During ancient times, the priests used to lock the temple gates at night and hand over the keys to them. Similarly the next day, they collected the keys from the duo and opened the temple.

Glorifying the Lord’s Vehicle
The shrine of Bhoothanaathar is to the left of Moothaswarar temple. Traditionally, Bhoothanaathar is the vehicle for the Lord, but here he blesses his devotees from a separate sanctum. During the temple festival, special rituals are done first for this deity.

Bronze Memento from Bhagavathy Amman
A bronze plate brought from the Bhagavathy Amman Temple at Kanyakumari, is the foundation for the flag mast of this temple. There is also a sacrificial altar here. 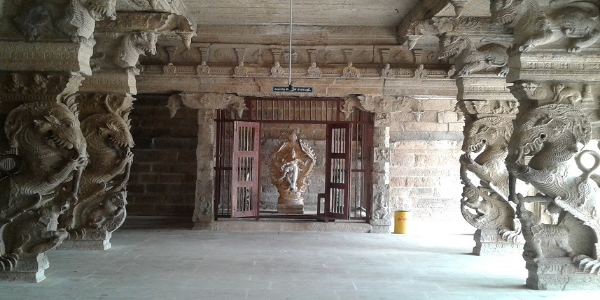 Rare Classic Herbal Art
On the ceiling of the Thirukalyana stage, one can see spectacular paintings done with naturally extracted dyes from rare herbs. These sketches elaborate on the history of the Nava Kailasam temples.

Tasty Treat for the Lord
A unique ritual here is that during the Uchikaala Abhishegam, a specially prepared feast of rice, curry and vegetables is offered to the Lord as Nei Vayithiyam.

Offerings for Amman to Bestow Marital Bliss
It is believed that by performing special poojas for Saturn, one can overcome obstacles in marriage. Also if one offers puffed rice and milk to the Amman, delays in matrimony is removed.

Symbol of Secularism
The Amman at this temple is worshipped even by Muslims. 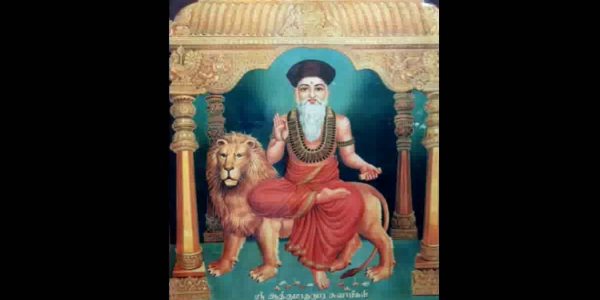 Kumarakurubarar’s Accolade to Sri Vaikundam
Sri Vaikundam is the birthplace of Kumarakurubarar, who remained dumb up till the age of five years. His parents then placed him near the flag mast at Tiruchendur temple and appealed Lord Muruga to grant him speech. Miraculously, due to divine blessings, he was gifted speech and sang “Kandan Kali Venba” in praise of the Lord. After that, he spent rest of his days at the sixth Kailasam temple at Sri Vaikundam. In his composition “Vaikunda Kalai also known as Kayilai Kalambagam”, he has mentioned this town as “Bhoologa Kailasam”. Even today, the house where he lived is present here and as a honour to him, some schools and colleges have been named after him.
Temple for Liberation from Misfortunes
It is highly beneficial for people of the sun signs Aquarius (கும்ப ராசி) and Capricorn (மகர ராசி). It is also said that this temple is as beneficial as worshipping at Thirunallaru (திருநள்ளாறு). By offering prayers here, one can be rid of the adverse effects of Saturn like loss of wealth, health, dignity and be blessed with a long prosperous life.

On the road to Tiruchendur from Tirunelveli Junction, you take the bridge over Thamirabarani at Sri Vaikundam – Pudukudi Road and travel north to reach this Shiva Temple.

All the buses that go to Sri Vaikundam from Tirunelveli New Bus-stand stop here. On the buses that ply between Nellai and Tiruchendur, you must get down at Pudukudi to reach here. Pudukudi also has a railway station to facilitate devotees who travel on rail.

Uromasa Maharishi, on the advice of Sage Agasthiyar, built nine Shiva temples along the banks …