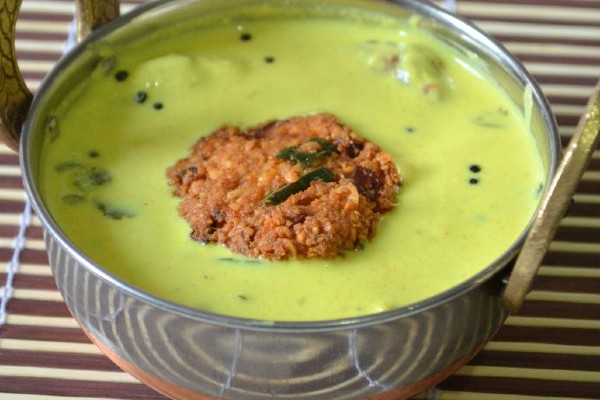 Moar kuzhambu or buttermilk gravy is a popular side dish that's paired with cooked rice. In Tirunelveli, we have four versions of buttermilk gravies:

While this gravy is popular throughout Tamil Nadu, Tirunelveli's moar kuzhambu has a distinct taste. Take, for example, the moar kuzhambu of Nagercoil, our neighbouring town. Here, the gravy has a Nanjil flavour, heavily influenced by Kerala, our neighbouring state. The natives of Nagercoil and Kerala refer to this dish as Pulissery. There is no wedding menu or festival without this dish as it is such an integral part of their food.

In Tirunelveli, leftover curd is usually made into more kuzhambu for lunch. A gravy like this is best cooked with vegetables such as ladies fingers and white pumpkin. Nonetheless, Tirunelveli natives add their own flair by marinating lentil vadais in the gravy. Thus the name "Paruppu Vadai Moar Kuzhambu".

Start by soaking the Bengal gram, yellow split gram, and raw rice in a bowl of water for thirty minutes. When the rice and lentils soften, grind them to a fine paste and all the other ingredients.

Whisk the curd into buttermilk by adding the required amount of water, salt, and turmeric powder and keep it aside. Add the ground paste to the buttermilk and whisk well.

Transfer the buttermilk to a thick-bottomed kadai and cook the gravy on low heat while stirring gently. Take care not to increase the heat, for the curdle will split. Keep stirring until the gravy comes to a gentle simmer and turn off the heat.

In a second pan, heat the gingelly oil and temper the spices. Pour the tempered oil over the kuzhambu and mix well. Now, it is time to add the prepared lentil vadais and allow them to sit in the gravy for at least fifteen minutes. Serve with piping hot rice.

Important tips: Ensure there is extra gravy for paruppu vadai moar kuzhambu, as the vadais will soak up a lot of the gravy. If you want to add tubers or vegetables like white pumpkin, yam, and chayote squash, boil them before adding to the buttermilk gravy. To add ladies fingers, stir-fry or deep fry them before adding them into the gravy.