Lord Shiva is worshipped in many divine forms. The mighty Destroyer, whose heavenly abode lies in the Himalayas, is also worshipped at the foothills of Thirukoodamalai, in Tirunelveli District. Where is this divine abode, and what is its significance? Let's take a trip into history and unravel the details.

The Kuttralanathar Temple & Its Historical Significance

According to history, the Kutralanathar temple or the Kutraleeswarar temple is one of Lord Shivan's two hundred and seventy five Thevara Thirusthalas (holy abode). Lor Shiva presides over this temple in the name of Lord Kutralanathar. As the temple's prime deity, Lord Shiva reigns over this temple as a glorious, self-manifested Lingam. The temple sits on three and a half acres of fertile land surrounded by the lush mountains of the Thirukoodamalai hills in the Western Ghats and the popular Shivamathugai falls.

History states that this temple is nearly 2000 years old, whereas legends say it was originally dedicated to Lord Vishnu. How?

Well, we all know the legend of Lord Shiva appointing Sage Agasthiar to rectify the imbalance that occurred in Mount Kailash during the celestial wedding with Goddess Parvathi. 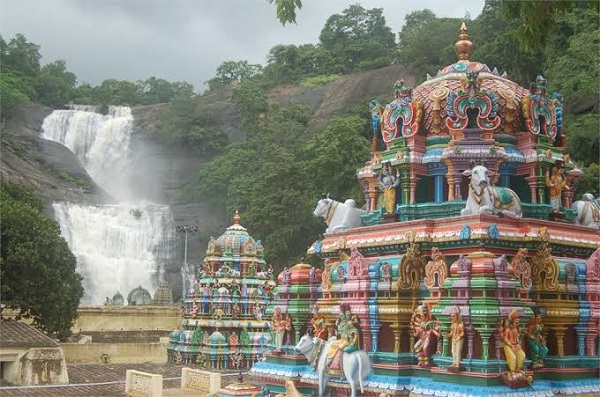 It is said that when Sage Agasthiar came to Coutrallam, he visited a temple dedicated to Lord Vishnu. Using his mystic powers, he changed the image of the presiding deity into Lingam and transformed the temple into an abode for Lord Shiva.

He also transformed Goddesses Sridevi and Bhudevi (Lord Visnu's consorts) into Kuzhalvai Mozhi Nayaki and Parasakthi, respectively. Goddess Parasakthi sits on a ledge or Peetam with a Sri Chakra design. This Peetam is popularly called Dharani Peetam. Dharani, which means Earth, signifies that Bhudevi or Mother Earth was transformed into Parasakthi. Considering Sakthi"s furious nature, a Shivalinga called Kamakoteeswara is installed before her peetam to appease her.

Legend has it that Lord Vishnu's conch expanded to become the temple, with the chakra transforming into the temple tower. Devotees say that Sage Agasthiar's fingerprints are still evident on the Lingam.

It is believed that since Sage Agasthiar shrunk the image of Lord Vishnu, the now-presiding diety has a permanent headache. Hence, as a daily ritual, the deity Lord Kutralanathar is consecrated with a special concoction of 64 herbs. The same herbal concoction is prepared as Prasadam for the night. 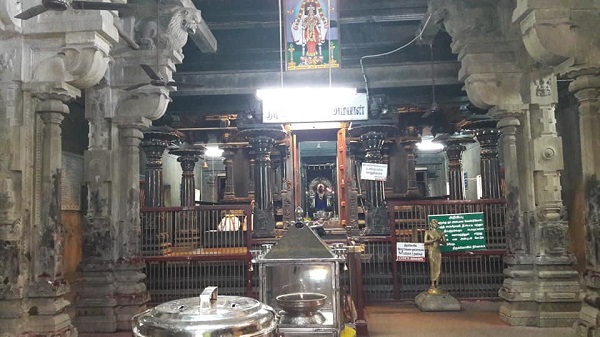 The temple has five entrances, with four representing the four Vedas and one serving as a special entrance for Pilavendan who came to the temple to enjoy the dance of Lord Shiva. The Devas in this temple are believed to be worshipping the Lord in the day while Sage Agastya is believed to do it in the night. Dwarapalakas in this temple are very unique because they are designed to look like they are conversing with each other. The temple also has Panchaboodha Lingams representing Fire, Earth, Water, Air, and Space. 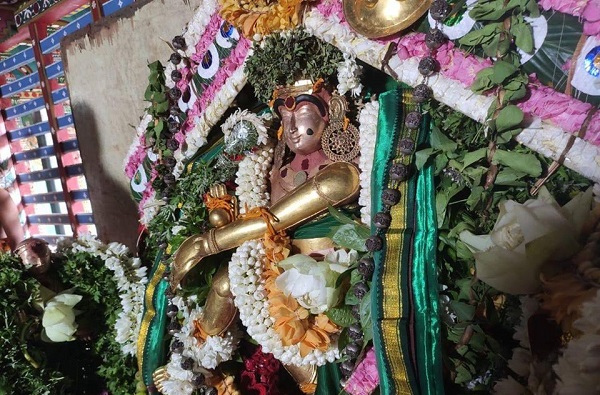 The presiding deity Lord Shiva is called Kuttralanathar, and his consort Goddess Parvathi is called Kuzhalvai Mozhiammai. A separate shrine dedicated to Adi Parasakthi is considered a Shakthi Peetha and is very popular with devotees. The Nandi idol faces the main shrine.

There are the statues of :

This holy temple is graced by Lord Vallabha Ganapathy. Lord Muruga is seen in his special shrine with Valli and Devasena, his two consorts. 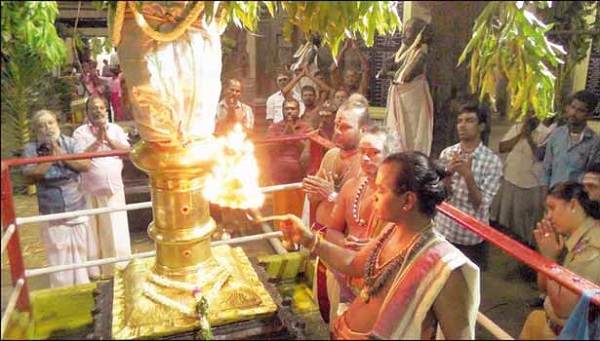 The Jack Tree or the Kurumpala is the sacred tree or sthalam of the Kutralanathar temple. The sacred tree is enclosed in an altar constructed around the sacred jackfruit tree with Adhi Kurumbala Easier shaped like a Peeta. Interestingly, the tree produces fruit yearly, but no one picks it. What's more unusual is that the jackfruits are shaped like Shiva lingams.

The Sthala Theertham or sacred water source is Siva Madhu Ganga in the North Falls.

Other Salient Features of Courtrallanathar Temple

Coutrallam is also home to Chitra Sabha Temple, one of the Pancha Sabha Kshetrams of Lord Shiva. This picturesque Chitra Sabha hall is located 500 metres away from the main temple. This Chitra Sabha is popular in this region for its stunning wall paintings and carvings, which closely resemble the Chitra Sabha at Chidambaram. Several carvings in the Chitra Sabha depict legends, deities, and some significant religious events that have taken place in Coutrallam.

Coutrallam's Chitra Sabha is also famous for its copper-plated roof and is decorated with paintings created completely out of natural dyes. Historical records state that Parakrima Pandiyan commenced the work on the Chitra Sabha, which was then completed by Uthayamarthanda Varman. 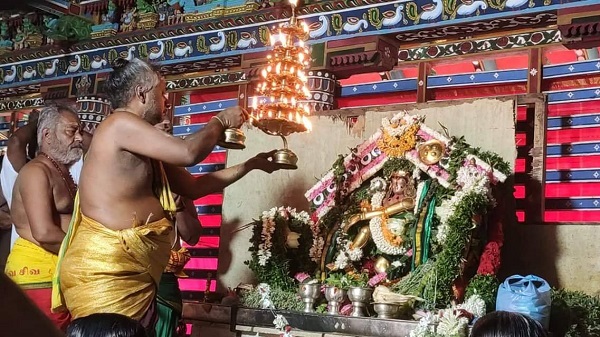 The Honorable Chief Minister's Annadhanam Scheme provides free meals for all devotees during the Saral and Aiyappa seasons. The temple provides lunch for up to a hundred devotees every day.

Where is Kutralanathar Temple Located?

Courtallam is located about 7 kilometres from the town of Tenkasi. The temple stands right in the middle of the town, about 200 metres from the bus station. Courtrallam is 58 kilometres away from Tirunelveli and is easily accessible by road.

Courtrallam is dotted with plenty of resorts and lodges that offer comfortable accommodation at various rental costs. The temple has also funded a dormitory and a building, New Thendral Bhavanam on West Car Street and Sannathi Street.

A visit to Courtallam is not complete without a refreshing bath at the famous kutralam falls and an uplifting visit to the Courtallam temple.