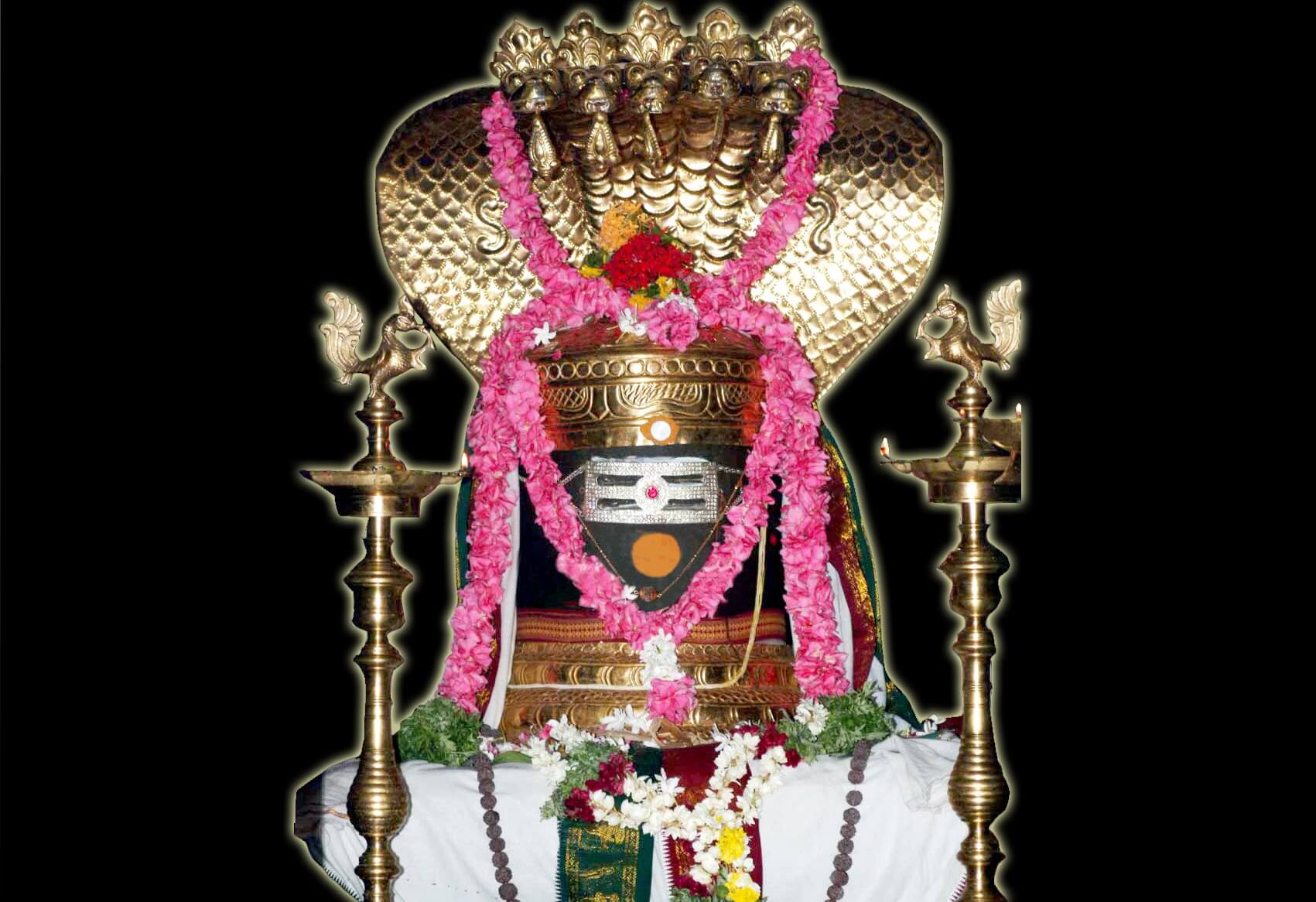 Rajapathy (Rajapathy) on the banks of Thamirabarani is the home of the eighth Kailasam. Rajapathy means the “Place where kings resided” or “the location of a palace”.

Steadfast Efforts of Devotees for the Lord’s Home

The temple built by Uromasa Maharishi, disciple of the holy sage Agasthya and the grandson of Lord Brahma is no longer here. The original temple was claimed by the swift flood waters of Thamirabarani. Now, there is only a small stone pillar left behind from the ancient temple.

Can ardent devotees stand by after witnessing this calamity? They wished to build a place of worship for the King of the Cosmic Dance (and the Lord who turned South to breathe in the sweet breeze), Lord Natarajar at Rajapathy. As a consequence of their efforts, now there is a magnificent temple for Lord Shiva. The construction of this temple was completed and the first Kumbabishegam was done in the year 2010. The temple works are carried out under the supervision of the Kailash Trust of Kovilpatti.

Devotees have bought a land of around 1.5 acres in the area where the original temple is believed to have existed. Looking back in history, we can see several instances where huge temples and monumental towers were constructed during the reigns of wealthy kings. However looking at the huge temple here, built as a result of the untiring efforts of humble devotees, one cannot but wonder at the divine hand that guided the efforts. 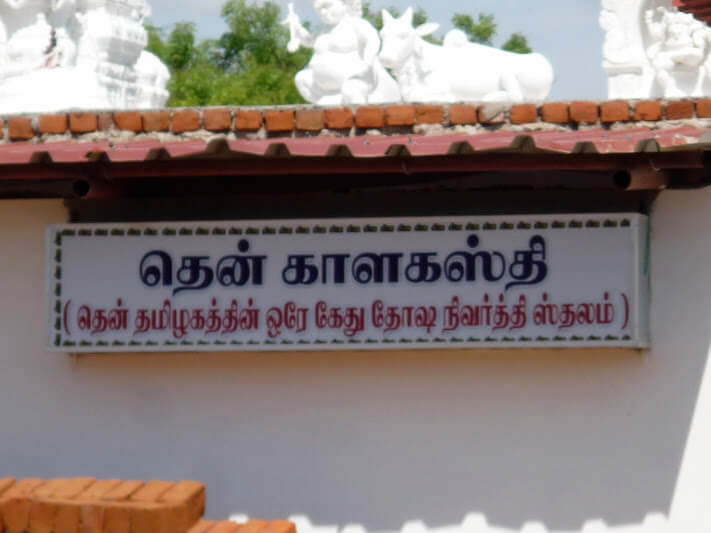 According to Hindu beliefs, it is said that Ketu (கேது) rules over a person’s life for seven years. During this period if Lord Ketu is malevolent, then one suffers from diseases and ill-health. One the other hand, if he is benevolent then all diseases and other sufferings melt away like snow under sun’s rays. Though good people undergo trials and tribulations, they are not forsaken by him. The perfect example for the saying, “Justice may be delayed, but it is never denied” is Lord Ketu. Hence it is believed that, worshipping Lord Shiva who is manifested in the form of Ketu at Rajapathy relieves one of all diseases. Also scriptures say that Ketu himself prayed to Lord Shiva at this sthalam.

This is the only Kailasam among all the Nava Kailasam temples that didn’t have a temple premises up until the year 2008. There was only a stone pillar that remained from the ancient Shiva temple constructed by Uromasa Maharishi. However, steadfast devotees weren’t discouraged by the lack of a regular temple. They believed that the aura of the Lord still prevailed in the region and worshipped him here. A few others who lacked belief moved to worshipping the Lord at a ruined temple at “Kutti Thottam” which is on the main road to Tiruchendur next to Thenthiruperai. However the construction of a magnificent new temple at Rajapathy has created an innate happiness among devotees. This is a testimony to the rule and might of Ketu.

The members of the Trust in the right direction and helped them to overcome obstacles. Miracles occurred to those who helped in the temple construction. Hurdles in marriage were eliminated, couples were blessed with a child, and patrons were blessed with prosperity in several fields like trade, politics and agriculture. Several doshams like Kalasarpa dosham, Pithur Dosham were eliminated. Hence several Bhaktas of the Lord came forward to contribute and the construction progressed quickly.

Continuing Power of the Ancient Temple

The ancient temple that was destroyed by the flood waters was constructed by Madurai Chandra Kula Pandya kings. It is said that different elements of that temple was taken to different places. The Nandi of this temple is now believed to be at Ottapidaram. It is a common belief among the people that their cattle remain free of diseases when special abhishekams are performed for this Nandi. The pillars and idols of this temple were washed away by the flood and taken to Puraiyoor, Marukaal, Vaikal Karai, Thenthiruperai and Ottapidaram by devotees and worshipped there.

While this temple was under construction the main deity was kept in a temporary edifice. All the rituals and poojas happened rigorously and devotees were eager to take part in the ceremonies even before the temple was finished. Shivaratri, Pradosham and other poojas were performed grandly.

Unique Features of this Temple 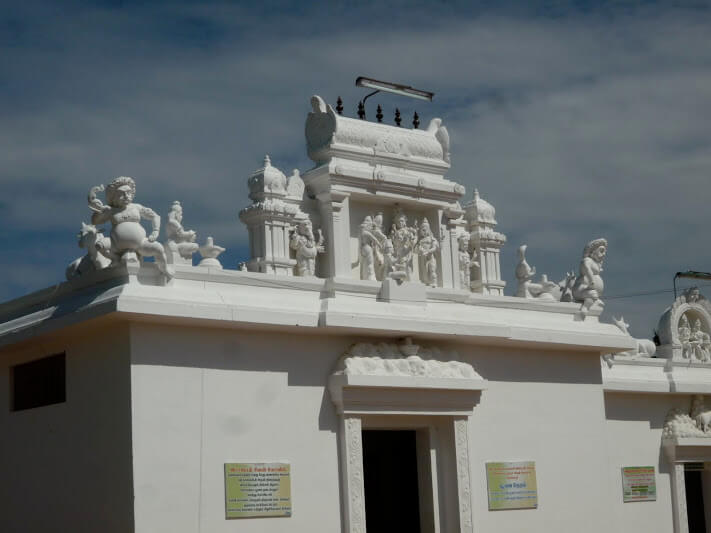 Deities at the Temple

Now this temple has been built magnificently. The Lord of this temple is Kailasanathar and the Goddess is Sri Soundara Nayagi. The sanctums of Lord Shiva, Goddess Shakthi, Chandikeswarar, Lord Vinayagar and Lord Murugan along with his consorts Valli and Theivanai have been built here.

As we enter this temple we can see the idols of Adhikara Nandi facing north, Bairavar facing south and Moon God and Sun God facing west. Next to the Maha-mandapam is Pradosha Nandi followed by the Dwarapalakars. Next are the idols of Vinayagar, Murugan and Nandi. Idols of Natarajar, Sivakami Ammal, Karaikal Ammal and Manickavasagar are made from an alloy of five precious metals.

As we circumambulate the temple, we can see the shrines of Thirugnanasambandar, Thirunavukkarasar, Sundarar and Manikkavasagar. To the left is Lord Dakshinamoorthy and Sri Kalahasthi Vinayagar is at the Kannimoola. At the back of the temple are Ketu Lingam, Kalahasthi Lingam and Lord Murugan along with Valli and Theivanai. To the left of the sanctum of the Lord is Chandikeswarar and Sivakami Ammai occupies a separate sanctum.

There is a direct road with sufficient road signs from Thenthiruperai. Another route is to turn right after crossing the bridge at Sethuku Vaiythanuku on the Eral - Kurumbur road. This temple is at a distance of 16 kms from Tiruchendur and 42 kms from Tirunelveli.

The Kumbabishegam for this newly constructed temple was done on 30/5/2010. A huge number of devotees took part in this auspicious occasion.